printing on fabric - not as easy as it looks

Last weekend I treated 2 yards of fabric for printing photos. 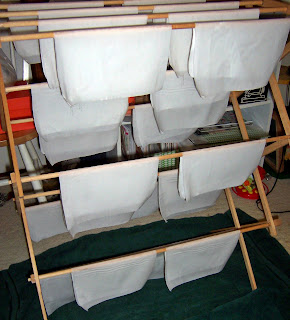 Directions said to iron the fabric to freezer paper.  I even bought new freezer paper for maximum stickiness.  Trim it to size and run it through the printer. 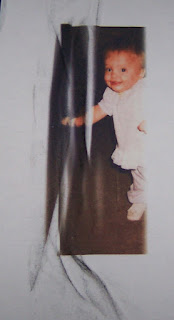 Not sticky enough.  That won't work.

Another source said to use clear packaging tape and tape your fabric to paper.  I decided to use cardstock for a little extra weight.  Trimmed the fabric about 1/4" smaller all around and taped it down. 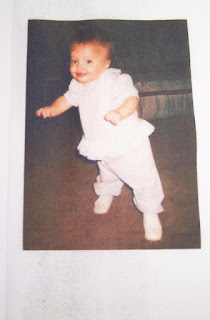 Much better.
Now let's try two photos on one page. 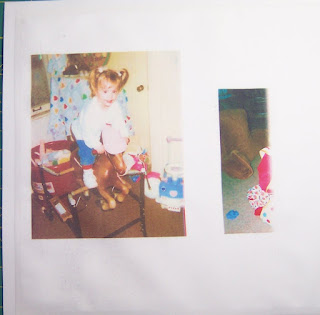 What's that computer?  Halfway through photo two you no longer HAVE a printer?

Okay, okay, so I can't do ANYTHING else while printing photos.  Anything that involves the computer, that is.

The next page came out nicely.  And then I quit because it was bedtime.  And because I don't enjoy taping fabric to paper.

But...I think I've got it figured out.

Today I went to a local, free quilt show.  It was also a sew-in for the group putting on the show, so I chatted with a member.  I think I'll be joining their group.  I didn't feel comfortable taking photos, so nothing to show, but there was a very wide variety of styles and abilities represented, so that makes me feel good.

And then, since it's so nice out (I think we missed spring?), I decided to photograph a few quilt tops that need it.  The first one went well and then Mother Nature decided to get windy... 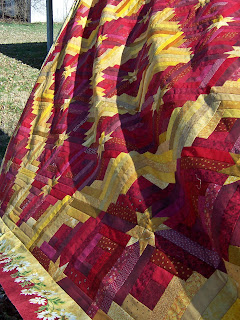 By the time I was done, I had to fight my way out of quilts that had wrapped themselves around me as I unpinned them from the clothesline, but I'll be adding them to the "parade of tops" page shortly because they're better than what's on there now.

Now...what to do...it's so beautiful outside, I feel like I should be out there, but I've got a pile of projects I want to work on inside, too...what to do, what to do!

I still love that red/gold quilt! I had not noticed the daisy border before, but what a beautiful finish it is!
You may remember my fabric/printer experience from a couple of years ago. I had to buy a new printer! I found taping over the front edge of the freezer paper and fabric worked best for me.
I should be working outside today too, but I'm NOT! ---"Love"

How frustrating! I've never tried printing on cloth, so I'm taking notes from your experience. I know what you mean about having skipped right over spring. It has been gorgeous all week here, sunny shorts-and-tshirt weather. I'm a little worried about the garden - things are leafing out and sprouting up a good month ahead of normal. What happens if we get frost again? It's not inconceivabl as it is still only mid-March!

Oh that photo printing looks tricky. I guess you have to really stand by the printer. Looks like you got it all figured out.
The red and gold is even more fantastic out in the daylight.
We have had lovely weather here too. I sometimes do hand sewing outside.

Gorgeous, gorgeous top there!!! Ugh, I know the frustrations of printing on fabric. Hope your printer keeps behaving!