The interview went well today.  I should hear something in about two weeks, once they finish interviewing everyone else.  But, I was contacted by another potential employer today, so I hope once I fill out the additional paperwork they're asking for I'll have another interview soon!  When it rains, it pours, right?!
Some of you have asked about the Star Flower fabric...  No, I didn't sew those curves, they were big flowers, the same as in the center of the blocks, fussy cut to fit. 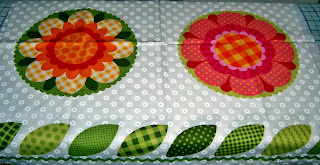 (Don't you just love those leaves along the edge?  They weren't used in the quilt, but I'm going to try to figure out how to use them in throw pillows or something because I think they're adorable!)
And the top is done!  I have to get a photo - being 72x92" it's a bit too big for the hubby or the clothesline.  Soon I hope!
And since that was done and I'm caught up on all but the Whig Rose applique UFOs, I thought I'd work ahead.
Remember this quilt? 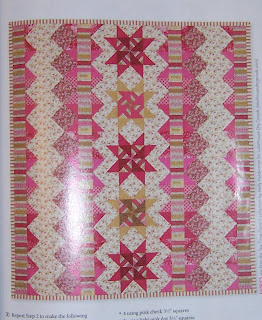 It's called "Garden Variety" and was in the
Summer 2010 Quilts and More magazine.
I found the kit on clearance about the time the UFO challenge was getting underway.
It's been sitting there since, waiting, as UFO #12. 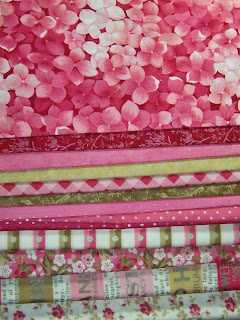 Since this is the UFO requiring the most work of those left on the list, I decided to dig in while I know I have a lot of time.  Getting ahead is always a good idea, right?  And it keeps me from starting something else new - something that isn't already on the UFO list even if it has the potential to use up scraps.
Cutting while the hubby was sleeping...

Some fabrics required a bit more fussy cutting than others... 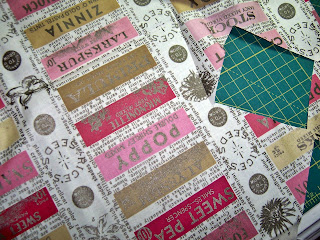 I absolutely LOVE this fabric and it's the reason I decided to buy such a PINK quilt kit.  But it was pretty hard to cut chunks out of the middle of it.  Heck, it was hard to cut strips to be used as sashing out of it!  I just want to wrap myself up in it and smile!
And then I worked on making flying geese over the past few days. 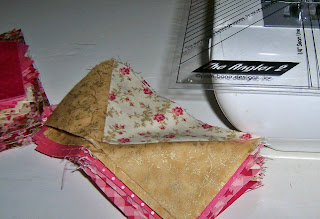 Ah, hello Angler!  It's been a while since I tucked you away last time.  You make things so much easier than having to draw all those pencil lines!
These were made with the "lost corner" technique, so I sewed a second seam before trimming and now I have lots of half-square triangles again.  There are a number of other block pieces that will generate more, too...
I seem to have a lot of quilty mojo this week, so I hope to show more progress on this quilt soon.
Happy quilting,
Katie
ps I forgot to mention the new tab at the top "parade of tops" - I figure my finished quilts get their own links over on the side, but there are quite a few finished tops that get forgotten, so I decided to give them a chance to shine.  And maybe it's secret motivation for myself to not start anything else I don't have intentions to finish...maybe...
Posted by Katie at 7:16 PM

You've been busy, busy too! And you definitely need to find a place for those leaves! I'm sure it won't be a problem. That pink quilt is going to be outstanding! (and my colors!) I have the Angler too, but have never used it! I need to try that out with all my little projects. I just week used my Super Slider for my first free motion quilting on the deer. I have so many gadgets, just like everyone else. I need to either start using them, or quit buying them! Good luck with the interview; hope you have a lot and can pick the best job for yourself! ---"Love"

I'm glad to hear the interview went well and you have a second opportunity, too. Hope all goes well and you have more than one offer to choose from! Those leaves are so cute, they must be used on something! Love the pink quilt, too. I do like pink. Have fun while you can, a new job will cut into your quilty time. Best of luck!

Your flowers are sooo wonderful, I just love them....you are getting alot done....

You are really on a quilty roll. The fabrics for your pink quilt are really pretty. I can't wait to see your progress on this quilt.
Good luck with the interviews. I hope you end up with your choice of great jobs to pick from. Until then sew, sew, sew. :)

I really enjoyed your parade of tops. You have quite a few to pick from and finish up if you need to gift a quilt on short notice - though I'd have trouble letting go of a loit of those :)

Wow, great find on the sale kit! It's a super pattern. The flower print is terrific - can't wait to see what you do with those leaves. Fingers crossed for your interviews. ann :-)