I just returned from a shop hop!  I went north with my mom, met a friend of hers at her cottage near the shops and we had a blast.  We stayed Friday and Saturday night at the cottage, hit the 6 shops on the hop on Saturday, plus another quilt shop and a Ben Franklin that sells (good, reasonably priced) fabric on Friday.  Whew!
The Ben Franklin had tons of fabrics, but I held back.  Without a project in mind, I know better than to buy any, but then I found the clearance bin of books. 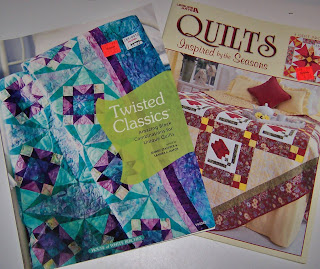 There was at least one book in that bin that I saw at 3 quilt shops - regular price!  The Twisted Classics has about 20 quilts, almost every single one I like.  The other has about 6 and I like about half, but for $4.31, that's cheaper than a single pattern!
My other goodies...there are patterns.

The second from left was also on clearance, so another score!
I love the little lambs on the far left.  I might use a fleecy fabric for the bodies and make it a touchy baby quilt in the near future (though I'm not aware of any pregnant gals who aren't already in the line for quilts).
The far right will be so adorable for a little boy...someday.
And the middle left and middle right were just too pretty to pass up.  I'll figure out when to use them eventually.  :)
And that middle pattern will NOT quit glaring, so it gets another photo of its own 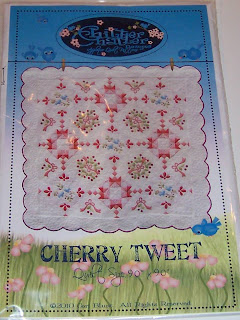 How cute is that?  And finishing at 90x90, the applique should have good-sized pieces.  And it will finish a useable size, which is nice.
And there was a little spending for the newest sewer in the family - my niece who helped make pillowcases 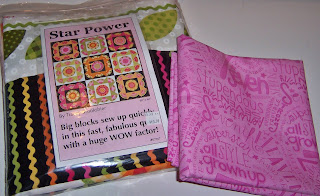 The pink fabric will be pillowcases for her 7th birthday.  It has 7 stuff all over it, and for $2.99 a yard, I wished they had other useable numbers for the other kids!
The kit will be made larger by three more blocks, a border and be for the same niece for Christmas.  She doesn't have a quilt other than her baby quilt, so it's time.  This is going to be so much fun now that the hair-pulling part of figuring out how to make it big enough and how much fabric to buy is over.  (I'll have to share some of that journey when the quilt is in the construction stages.)  But shhhhh!  It will be a suprize.
And there were some freebies 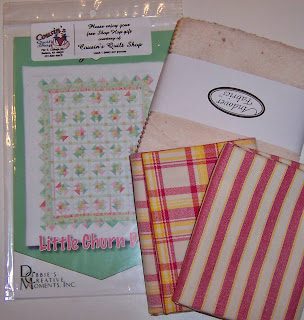 There were others, but these are the fun ones.  The charm pack is actually flannels and I traded my mom for an apron I got because she really admired it and didn't know what to do with the charm squares.
I forgot my camera, but there were some beautiful views (and a sweet kitty), so I'm hoping my mom will pass those along that she took and I can share them soon.
We had so much fun.  We ate lots of good food, sat up talking too late, and enjoyed ourselves.  But it does feel wonderful to get home.
Now it's back to reality.  And a baby quilt that needs finished.  And a wedding quilt that needs finished sooner.  Yikes!  But first, the kitties and I need some snuggle time...now where is that movie...?
Happy quilting,
Katie
Posted by Katie at 7:15 PM

What a great weekend! Sounds like so much fun. All of your patterns are beautiful and you got some great bargains and freebees. I am going to a shop hop in town next weekend, I can't wait. Enjoy some time with the kitties and have fun with all of your projects!

What a fun time! And so many cute patterns and other things! Enjoy all the time you can with your mom while you have her! ---"Love"

Wow, Katie, where to begin. The books and patterns are all fantastic, but I love the 'seven' fabric and the Star Power quilt kit. What fun! Lucky you.

Sounds like great fun! BTW I am going to meet Beth tomorrow to do a shop hop of our own! Can't wait! I wonder if she finished her APQ block swap quilt yet. If so, maybe I'll get to see it. I will be posting pictures on Wednesday I hope.

Sounds like you had a lot of fun! Wish I had someone to share my passion with, but that's where you guys come in, LOL! Love all your new buys!

Shop hops are so much fun! Looks like you got a lot of great stuff on yours. I love those lambs too. I don't know how you resisted all the fabrics. I really have to stop buying without a project in mind. The pillowcase and quilt are going to be so cute and she is going to love them.
Glad you had so much fun.