It's been a long time coming for this quilt to get it's day on the blog, but it's finally been gifted, so I can finally really show it off!
Last night, we took Joe (hubby's brother) and Ashley (Joe's wife) out to dinner for their 1st wedding anniversary.  Though it's a few weeks off yet, our schedules all worked together and we went early.
We picked Ashley up at work, drove through the edge of a storm that we're sure produced tornados shortly after we were there, arrived at the restraunt as they were allowing everyone back out of the kitchen/tornado shelter, and had a wonderful dinner.
And gave them their quilt. 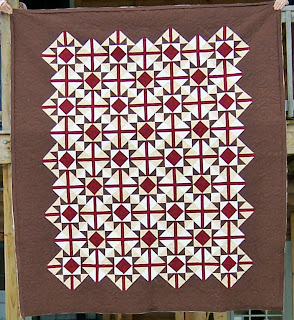 (Don't look too closely, as the binding still needed to be hand-sewn down in this photo!)
So you may be wondering why I gave this as a 1st anniversary gift.  Well...Joe and Ashley have had an interesting relationship...I won't go into details, but noone was really sure they'd make it this long, so the hubby vetoed a wedding quilt.  I decided if they made it a year, they'd made it through (hopefully) the hardest part of the marriage and would make it much longer, so I'd make them a quilt then.  About 6 months in, I had to start thinking about it and hoped that nothing would happen in the meantime and force me to find another place for this quilt to go.  You've seen much of this quilt in progress, but here's the final product!  (The largest quilt I've quilted on my longarm to date!)
Ashley was really excited to get the quilt.  She'd realized that she and Joe were the only ones in the family who hadn't gotten a quilt (all the kids have them, all the married couples have at least one) and was thrilled that she finally got one, too.  I guess it's the mark of being family?
I even found out that my guessing at colors was right!  I mentioned it's queen-size and I hope it fits their bed if they want to use it that way and found out they plan to use it AND it matches their bedroom decor already!  How's that for luck?
I'm so happy Ashley liked it.  Joe didn't act very excited, but you know boys...
For anyone interested in the pattern, it came from the Moda Bake Shop, though I made the blocks bigger and made more and added wider borders to make it queen-sized.  It's called Antique Etoiles and the pattern is here.
It was an evening we won't soon forget.  Driving, blinding rain on the freeway on the way in forced us to a crawl and had the hubby (driving) nervous and the rest of us thankful we weren't in his place.  We drove through ginormous street puddles once we'd gotten out of the rain and recieved a few phone calls from concerned family members who knew where were were in relation to the tornado warnings.  And the drive home was surreal - the storm had passed, but freeway traffic again was at a crawl because huge trees were ripped and twisted and pieces were tossed everywhere.  At one point we could see a path about 20 feet wide where the tops of trees were ripped off about 20 feet up - no wind storm will do that!  There were lots of larger trees that had just tipped over as well, thanks to weeks of rain and 60mph winds.  Thousands are without power, many without homes and I imagine a few pre-teens are cheering as a middle school in the area was hugely damaged (no last week of school for them perhaps?).  But in light of the tornados much south of here, this was just a baby storm.  Yet having been right there, it's humbling to know we're all safe and alive.
As we got closer and closer to home, it became apparent this storm stayed south of us and our yard is free of even the usual branches that trees shed in heavier storms.  I'm thankful for this as well and will be very glad when this year's tornado season is finally over.
We got home relatively early (we went out pretty early, too), so I started on a new project or three...  I'll get photos of those and share soon.  I've been itching to start something new after visiting the Blogger's Quilt Festival (see left sidebar for link) and this was just the thing.
Happy quilting!
Katie
Posted by Katie at 7:54 AM

What a lovely quilt and well earned I should say. Glad you made it home safe, what a scarey time.

The quilt is gorgeous. So many different patterns to see with the overall design. Cool.

You have the best quilty stories. It is a lovely quilt. I hope it brings Joe and Ashley even closer together.

That is a wonderful quilt, I love the colors and all the secondary designs. It's great it matches their bedroom, too! Glad you are all safe and sound with no damage to your home. This has been a year of extremes!

I'm sure they will enjoy such a beautiful quilt. I'm so glad you weren't caught up in the storms, and are safe now. ---"Love"

So will you be calling it Joe & Ashley's Tornado Quilt? Wonderful they loved the quilt and so glad you are all safe! We'd be lost without you!

I'm so glad Ashley liked her quilt and is now family :). I'm also glad you made it home safely. This tornado season is making us all a little more respectful of stormy weather.

The quilt is great. And you quilted it yourself!? Glad that they liked the quilt and will use it.
Glad your home was safe from the damage all the strorms did. I really hope this crazy weather settles down soon.