I finally roped the hubby into holding quilts!
The wonky kitty stars quilt has been mostly finished for what seems like ever.  The top was done months ago.  It was mostly quilted recently on a snow day.  And finally, after a 3-hour marathon of binding-sewing, it was officially finished Wednesday night! 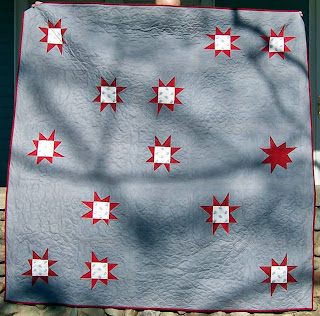 The blocks were made using the Maverick Star tutorial and the rest was just me figuring and sewing pieces together to get the desired effect.  It's about 80" square.
We had two nieces and a nephew spend the night last night, so it was done just in time to be used!  It's been on the couch since it was finished, but it got a real test last night.  The youngest niece (6) was very impressed when she was told the quilts they used last night were made by me.  She's now requested twice that I teach her to sew when she's older.
But it was a wild time around here.  We're not used to kids and the cats, with the exception of Tucker (and we can't figure this out), were terrifed!  Dinner was at Chuck E Cheese - a big hit for the kids.  Home to play hours of video games - a strictly regulated activity at home.  And this morning, running through the house like wild animals, screaming, hollering, stomping, playing good guy-bad guy, though I have no idea who was what.  Mostly just yelling and hollering and shooting toy guns, but it's another activity highly frowned upon by parents.  We're the aunt and uncle and have a big house, so it's okay here.
They wanted some rope to tie up the bad guys (or was it the good guys?) and we didn't have any, so I decided I'd sacrifice a few strips of fabric I don't really like.  Well...they found the rest of it... 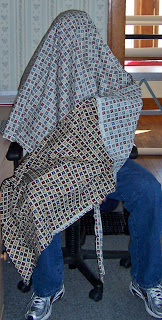 ...that's my hubby under there.  He gets into it, too.  I have another photo of him on the floor with them tying up his hands and legs...and another where this piece turned into a cape...  (And contrary to his earlier assertions, "biddy stuff" did not kill him!)
Now it's a return to normal.  Peace and quiet.  The kitties have come out of hiding and I'm going to return to quilting.  Too many projects, too little time!
Happy quilting,
Katie
Posted by Katie at 12:59 PM

Sounds like the kids had a wonderful time! Aunts and uncles do sometimes allow more indulgence than parents, and that's a good thing!
Your quilt is really pretty, and your design turned out quite well! Have fun quilting today! ---"Love"

running through the house like wild animals, screaming, hollering, stomping,

lol that is my house everyday!!!!

Sounds like you had fun but it must be nice to send them home :)

The best part of being an Aunt and Uncle is you can spoil them when they are there, then send them home when the fun is over. They will have great memories of staying with you. The quilt is great, really cute kitty fabric. It nice that your niece is interested in sewing and Aunt Katie can teach her, those will be some fun times, too. Hope you and the kitties recover from all the excitement and you can enjoy quilting time. Sounds like your hubby is still a kid at heart.

I am not sure about you and the hubby but I am sure the kids had a blast. Sounds like you have a little quilter in the making.
Wonky stars looks great!!
Enjoy the rest of the weekend

The quilt is awesome and it sounds like a fun time with your nieces & nephew. Always good for a change of scenery - for kids. I'm sure the cats will survive.

Poor kitties! LOL. Sounds like you had loads of fun.

Kids in the house bring in life that is much appreciated;) They remind us to have fun sometime's;) That's how it is when my son comes down, or I go to see them up there;) And it is suprising just how much the grown men can get into the action...too funny;)
Happy Quiltin!!

It sounds like you are well established as favourite aunt and uncle! Now you can put your feet up and recover :)

My extra batting recently became bandages for the stuffed animals going to the vet for our good friends kids that stayed with us for a few days. It's amazing what secondary uses they can find for our quilting materials.
The stars came out great. Looks like you are getting good at the new long arm!

YOur quilt turned out great. Hopefully, it has inspired another young lady to become a quilter like her Aunt. Sounds like you had a great time. Connie204