covered in fuzzies: the tale of a weekend

It's been a GOOD weekend.
Up early Saturday.  What to do while waiting for the sun to come up and the hubby to rise from the dead?  Cookies!  (Cheater cookies on clearance...) 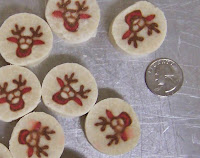 Or step outside and take some photos.  I think it was 5 F around the time I took these. 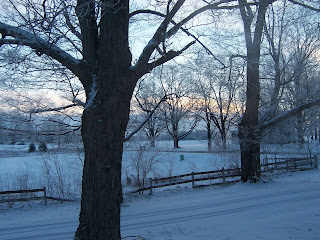 Everything was covered in a layer of frosty snowy stuff. 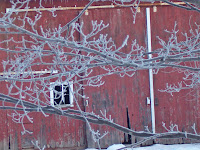 When the sun came up, it sparkled until it was gone.
Finally enough daylight, so let's lay out the Bliss French Kiss blocks. 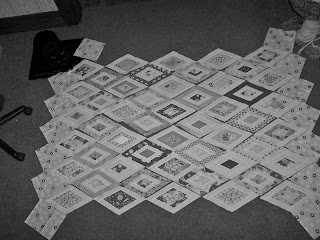 Testing for contrastiness with a little help from Mr. Tucker (you can only really see his ears and eyes...he and the furnace register are both black...upper left).
And finally the hubby got up.  To take me shopping.  You see, in cutting those setting triangles (that were really rectangles with a 60 degree slice taken off and will be trimmed further later), I realized I needed about 7 inches more of that fabric.  Off to my new favorite quilt shop. 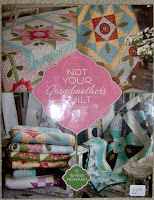 This book hopped in my bag, too.  It's one I really wanted and had almost ordered online.  I supported my not-so-local quilt shop instead.
Back home to sew, sew, sew.
Before bedtime: 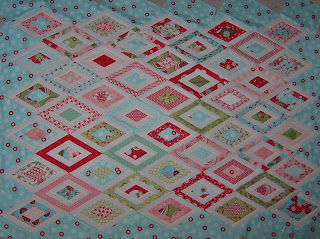 It still needs trimming and borders, but since this is officially #1 on my UFO Challenge list and I don't like long seams, I figure I can set it aside and know it will be done.  Eventually.  We'll audition border fabrics later.
Up early again this morning.  Nearly as pretty as yesterday, just as cold, minus frosty stuff.  But perfect to dig into this: 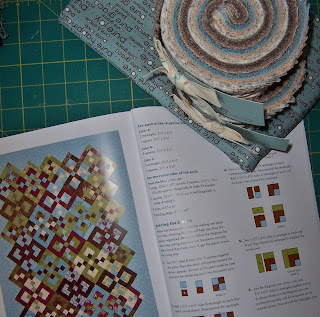 I'd changed my mind on patterns, so had ordered a second jelly roll.  Now I have an extra charm pack, but I'll figure that out later.  This is officialy #2 on my UFO Challenge, but why not get a jump on things?
Matching fabrics, cutting each block individually...whew!  Time for lunch! 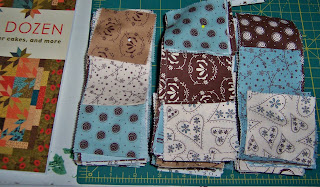 After a family clebration for my nephew (he turned 2 on the 6th - you'll see his quilt soon!), back home to start sewing.  Yay!

I didn't get far and sewed some things wrong and had to rip on the third block, so I decided it was time for dinner.
Note to future users: This pattern does not work well for directional fabrics.  Like the "&"s and the argyles (or gargoyles as my aunt Ann would have called them) or the stripes in that tan.  And the words that are in fabrics not seen here.  Live and learn.
So I'm a little bit lot fuzzy, thanks to Moda precuts and their pinked edges.
I'm done for tonight.  Potatoes are boiling to be mashed and biscuits need to be started shortly.  I think I'll put my feet up and read some tonight.
Happy quilting,
Katie
Posted by Katie at 7:50 PM

Beautiful scenery! You really get up that early??? *frown* Of course, that's why you accomplish so much on your pretty quilts! ---"Love"

You had a very productive weekend! Your fabrics are all so pretty. Keep up the good work!

I just love that 'Pure' fabric. Your photos are very pretty. (Our sunrise is still quite late so even I can catch it every morning.) The 'Bliss quilt is coming along nicely, too. Not bad for one little weekend in January.

Love the Bliss French Kiss. The colors are soooo pretty. You got a lot done!
I like the 'Pure' project too. Is it from the book in the one shot? I have that book.
You got a ton done and it looks great. ERnjoy your book.

The French Kiss quilt is coming along nicely;) You will have it done in no time with that long arm you have;) I can see what you are saying about the directionals in that second quilt.
Happy Quilting!!

Love the quilts! I get up early, too, not because I want to, but because my body says so, LOL. There's a lot you can do while hubby sleeps!

There is certainly alot of quilty goodness going on over there....love the quilts.

No Wonder that you get so much done. Didn't I say earlier that I didn't think you slept. Your pictures are so pretty. I will let you know about the email settings. Thanks, Connie204

That was a productive weeekend :) Your Bliss Fench Kiss looks great. Long seams on borders are not my favourite part of quilting either!

The Bliss French Kiss quilt looks amazing! I love the contrast and way it turned out. The only thing I don't like about Moda precuts are all those fuzzies. Hope you got them under control!

Wow very productive!!! I love both projects. The pure fabrics are so much fun but I know what you mean about the directional prints. I can't wait to see it finished! :) Christine