I hope you all had a wonderful Thanksgiving (for those of you who celebrate!).  We had a nice day.  Two huge dinners in one day, though, made feel ready to burst!
I took dessert to my family.  An Upside-Down Cranberry Cake that I took a photo of, but my camera ate it.  And now the cake itself has been eaten by people, too...  The name is a link to the recipe and mine looked just the same as their photo.  Yummy, dense, pound-cake-like cake with the little bit of tart from the cranberries.  So good!  (But if you make it, put a drip pan under it...I now have to scrub out my oven bottom...)
I also took a Maple Walnut Cheesecake.  (Name here is a link to recipe, too.)  The camera didn't eat this photo. 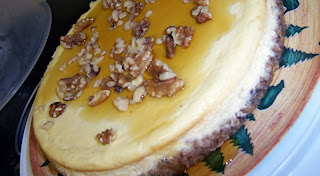 The crust on this was a little tricky.  It calls for 16 cookies of a sort I couldn't find.  So I winged it with vanilla wafers and a crust recipe I've used before, plus a little bit of maple flavoring in with the melted butter.  Very good, but after eating the cranberry cake, it almost tasted bland.  (I guess my tastebuds were all out of whack from the tartness of cranberries?)
Now lest you think we had only desserts, we didn't.  I took veggies to the hubby's family.  And both my mom and my hubby's mom put out good spreads for the two dinners.  And though I ate and ate and ate, my pants still fit.  (If you wear pants with a non-elastic waistband, you know when to quit sooner than those with elastic waistbands!)  :)
I haven't made any progress on my one thing, one week challenge, but Connie...there's a tutorial for the keychain wallet here.  I string pieced my front and back rectangles using used dryer sheets for foundations (instead of using just one solie piece) and didn't use any batting.  Otherwise, I think it's the same.
But I didn't have to work today and my mom has made a quilt for my dad for Christmas, so I invited her down to quilt it.  She was planning to use her little machine, but I had thread that was a good color, so we gave it a go. 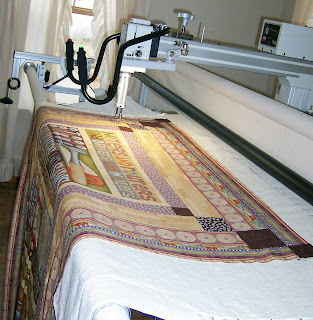 We learned a few things, but that was okay.  My mom and I both plan to use it a lot more, so it was good we were both learning together.  The quilt is quilted and trimmed and she's so excited!
Between rethreading, winding bobbins, and troubleshooting (mom was there the whole way, learning and suggesting, so don't think I was waiting on her!) I managed to get the binding sewn halfway onto the quilt for my hubby for Christmas.  Yep, it's back from the quilter already (though she tried to give it back when I bought her extra machine, but I told her to just go ahead and do it because otherwise it wouldn't be a suprize any more!) and I'm excited.  I got almost halfway around with the hand-sewn portion too, but the hubby is on his way home (he had to work today) so I had to tuck it away.  I promise photos when it's done.  The quilting is super cool!
Tonight we have the oldest nephew staying with us again.  He doesn't care much for his step-mom, so the weekends he spends with his dad (my hubby's brother), he often ends up here.  It's okay.  He's 10 and loves video games, so he and the hubby have a fantastic time.  But he's a good kid, too.  Polite, considerate and even puts his dirty dishes in the sink without being asked!  (He's gonna make some lucky lady a great husband someday if he keeps this up, but we're hoping that's quite a few more years down the road!)
Off to figure out dinner for the boys...they're on the way!
Happy quilting,
Katie
Posted by Katie at 6:57 PM

Thanksgiving is for eating but the month in between before Christmas gives us time to recover before we do it again! Sounds like you had a great time. I'm glad to hear you are working with your long arm machine, it must be so much fun. Enjoy working on your surprise gift for hubby and hope it is a wonderful surprise for him. I know he will love it.

I just might have to make the Upside-down Cranberry Cake. I like your mom's quilt for your dad, and how nice that you both got to practice on the machine. Your nephew sounds like a really nice boy.

Thank you Katie. I will attempt it this week. I haven't been here lately, just too much going on. Glad you had a nice Thanksgiving. Your long arm and the quilt look really great. Connie204

I'm glad you're jumping in and learning to use your longarm. It's nice that your mom is able to share the joys and frustrations of the learning curve with you.

Doesn't it alwayts seem easier to tackle a new skill with someone? Sounds like you learned a lot together on the longarm.
So glad you had a good thanksgiving.
Also glad I only had one meal to attend ( and consume).