I have a 4th grade nephew who is playing football this year.  My hubby is super excited because that's his thing and he's helping with carpools and attending games.
The first game was on a rainy, cold Saturday.  I got up early, thinking the game was on Sunday, and baked some chocolate chip cookies just to warm up the house.  (A little trick my mom taught me - it saves running the furnace and you've got goodies in the process!)
The hubby asked if the cookies were for the kids.  For after the game.  Well...no...but you can take them.  We really don't need 4 dozen cookies just for us!
The second game was lightninged out...  We took only oranges, but they never even got cut up because they were bought on the way to the game and it was cancelled before it started.
Game #3 I baked oatmeal raisin cookies and took the oranges, hoping no other mom or dad or aunt or anyone would double up.  But kinda hoping they would, too, so we could start a rotation.  Noone brought anything.
Game #4 I baked peanut butter cookies and again showed up with those and oranges.  Noone brought anything else.
Game #5 is tomorrow. 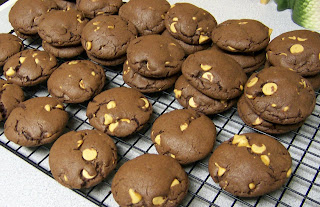 Devil's Food Peanut Butter Chip cookies.
Now, I love to bake.  And I love to share it with people who appreciate it.  You can't get a much better crowd than young boys.  Well, boys of any age, really!  So I'm not as upset as I could be.  But do you know that in 4 weeks, soon to be 5, not one single mother of a football player, mother of a cheerleader (they have a group of girls the same age as the boys) or coach has said thank you?  Noone has asked where their child is getting cookies and oranges.  Noone has offered to help.  Nothing.
I have become the team mom.
I suppose there are worse things and I don't have to drive a mini-van!
And now for something completely different...
I went to the local library book sale yesterday. 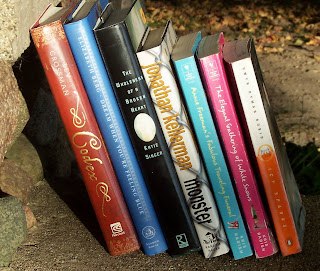 I didn't get much, but the sale was much smaller.  And I'm happy with what I got.  They've now been added to the big stack, but here's where the blond comes in...or just having bought too many books in July...  I bought both "Icy Sparks" and "Annie Freeman's Fabulous Traveling Funeral" a second time!  I sure hope they're as good as I thought BOTH times!
So next month, the book stack will likely be taller, but it's all good.  Cold weather is fast approaching and I'm much more likely to be found curled up with a quilt, cat and book during those months.  And my goal is to have that stack GONE by July of next year.  I can do it!
And finally, as I was outside taking the book photo, one of my barn kitties was insisting she get her photo taken.  Her, um, great uncle? (his momma is her great-grandma) was around, so they were being all lovey to each other, so I thought it would make a great picture.  Eli complied, but Smokey kept rubbing on him so all I got was her backside.  By the time I got this one, I think Eli was getting a bit sick of me... 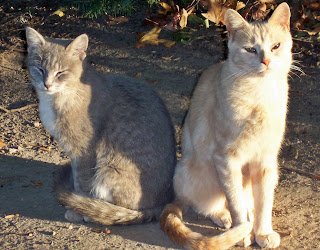 And now, if you'll excuse me, I have some oranges that need slicing!
Happy quilting,
Katie
Posted by Katie at 6:43 PM

Wow, when my kids were in sports the coach would hand out the snack list at the first game and everyone took turns bringing snacks. Glad to hear you had some treats, but I think you have contributed enough and it's someone elses turn. But it is great to be the snack hero after the game!

Looks like you are "the ant" storing away your books for winter. You will never be bored, happy reading and quilting!

Wow...it's very generous of you to bring snack so often. Even though you like to bake it isn't fun to be taken for granted. Maybe you need to not bring anything next week - then maybe someone will wake up and wonder where it all came from the previous weeks. It's easy to advise, much harder to do it myself. I'm currently in week 7 of a school carpool where the other family has yet to drive...

Very pretty kitties you have there;) As for the team mom stuff....I ran into the same sort of issues when I had my kids involved in stuff. The parents are either totally oblivious to the fact that you are bringing stuff out of graciousness and lacking the politeness to say thank you, or maybe they think it was arranges as part of the deal. Who knows;) You could always circulate a flyer amoung the children to take home asking parents to sign up for goodie bringing...then they would be aware of their own shortcomings.
That's my two cents;)
Happy Quilting!!

Been there, done that, and got the same results when my boys were playing Little League! But I can tell you those little boys will love you and remember you forever, especially for those chocolate peanut butter chip cookies! I know I would! I'm still trying to figure out how you manage to quilt, read, bake cookies, and attend games! You truly are Wonder Woman! (And everyone loves her!)---"Love"

That's a real shame Katie. When did folks become like this? Love the new look on your blog! Ann :-)

Katie, those cookies all sound delicious. No wonder no one else has volunteered to help. A thank-you from some of the parents would be nice, but you are really doing this for your nephew and the other boys, who obviously appreciate it.

Your cookies look sooo good. Makes my mouth water. Lucky boys. Rude parents. Nice Katie.
More books to your stack hu? You can for sure read them all by the time the weather warms up again. Let us know if you find some 'must reads'.
Happy stitching, reading, baking.

I also don't know what has happened to people. But Love is right the kids will remember you always and I know that they appreciate all the wonderful cookies. YUM! Your library is growing, I see you like Kellerman. I am just finishing up Faye Kellerman's new one "Hangman". I've been having trouble putting it down. Enjoy! Connie204