Yesterday I went to my mom's guild quilt show.  There were a lot of quilts that were wonderful.  A lot of quilters worked very hard on them and I admire their confidence to display them, even if they weren't judged.
In no particular order, but with quilt info below:
This one made me think of Ann H and her quilts made of antique fabrics.  There was a whole display of quilts in these colors, but this was by far my favorite.  I love to see old quilts.  I love to see that they were used.  Whether it's in mint condition or not, it's an heirloom to me.  And if there's a story to it, all the better! 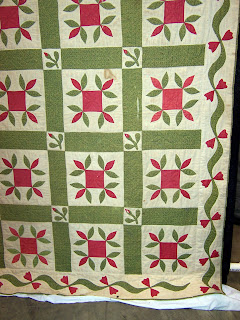 Though I'm not sure the photo shows it well, all of those letters were appliqued, then embroidered around the outside and embellished.  Though you can see the edge of a ribbon off to the left side, I didn't note what it was for.  (Craziness for tackling such tiny pieces?!) 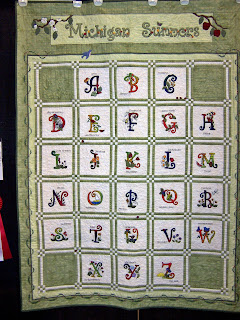 This one was done in wool, but I love the colors and the primitive shapes.  Not your typical colors for primitive work, which made it even better for me. 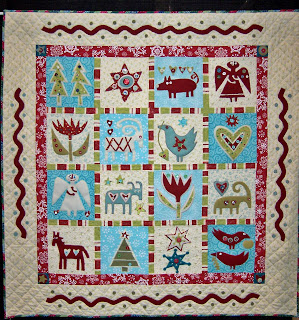 Again, I'm not sure if you can see the animals appliqued in each block well, but they're super cute.  I love the slightly wonky setting as well as the extras added to what could have been a pretty boring block center.  A little out of the box innovation I need to file into the vast recesses of my brain for another day. 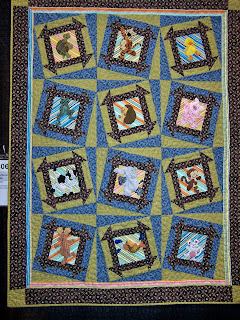 My mom cringed at this one.  Far too bright for her and I think that border made her dizzy!  But I love it.  I see prints like this and never think "border" and then walk away.  Still trying to make my brain get outside of that box... 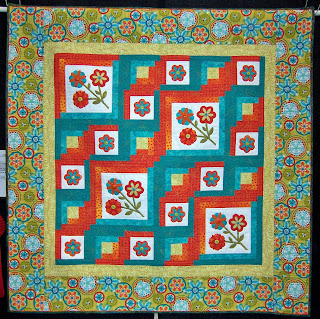 This one was submitted by my mom.  She was too chicken to have it judged.  I told one of her friends she should have put "CRAZY LADY" in for her name, but she owned up to it.  A lot of those brights are leftovers that I shared with her, but the work is all hers.  She usually doesn't go this bright and I'm not sure how she finished this without falling off her chair from vertigo (maybe she did?), but it's pretty spectacular. 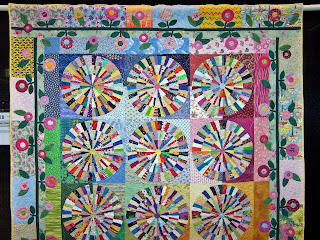 This one caught my eye because the brights make the stars pop.  Though I think it's probably technically a scrap quilt, it's got that control I like, so it made the cut! 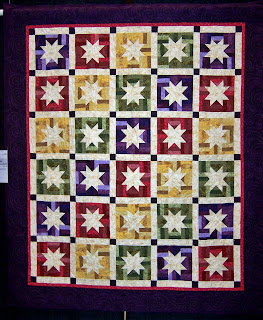 This one is just too much fun.  I love the colors and the flowers and how bright and cheerful it is.  It smacks you from across the room and makes you notice how much fun it is. 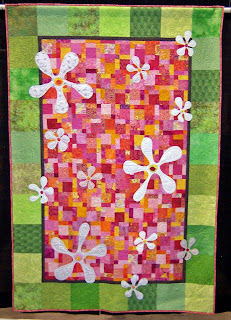 This one, though simple, is really neat.  I love the black and grey and white.  I don't think there were any others that stuck to such a rigid color scheme. 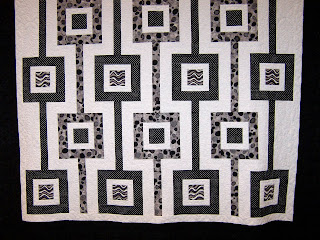 And this one is also a fun one.  The gal who made it is my favorite longarm quilter.  She shouldn't be called a quilter, really...she's an artist.  This one also won a ribbon, but again I forgot to see what it was for.  And though I really like this quilt, I don't think it shows the level of her artistic talent - she can do so much more!  Maybe that's the case for other quilters who entered their quilts, but this one I know personally.  I've seen her studio.  I've seen her longarming.  I'm biased! 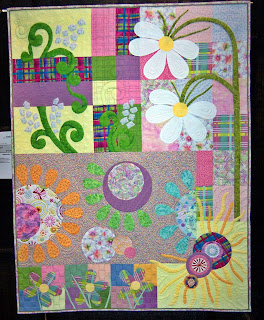 There were many more that were really good and some of these even may have won ribbons and I didn't pay enough attention to realize it.
And then there were the vendors.  I could have spent a lot more, but sadly there weren't very many with bolts of fabrics.  A lot of fat quarters and other pre-cuts.  A few had yard or half-hard pieces...  While I understand the difficulty of cutting fabrics at a show, I'm regularly disappointed by this.  I took $$ to spend and if I could have gotten 2-3 yards of some of the fabrics, I probably would have.  Instead, I came home with more than half the money I took and will probably end up either at a local quilt shop or online soon to spend the rest of it.  (It's burning a hole in my pocket, you know!)
But I did get some goodies! 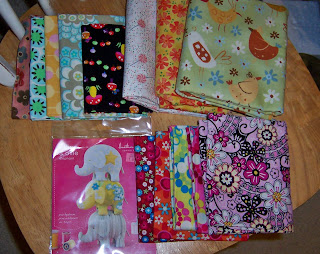 The elephant "pincushion" pattern was the only pattern I got.  And I'm pretty sure if I ever actually finish one (I'll try!), it's not going to get any pins stuck into it.
The three pieces in the top right are 1-yard cuts for $5!  I would have bought more, but most of what she had were more traditional fabrics, blenders and civil war reproduction-type stuff.  Nice, but not my thing.
The five next to the elephant pattern and the left-most piece on top were all $1 fat quarters!
And finally, the mushrooms and three Amy Butler (or AB-ish, not for sure if they all are) I actually paid full price for those fat quarters, but I like them.
I have no idea what I'm going to do with any of these, but I'd better get my behind in gear to figure something out because my stash has gotten far worse than I ever wanted.  Quilt shows are just too much temptation and I've been to a lot this year (mostly without my camera).
Ah yes, I also bought the three Halloween fat quarters you see Just Another Quilter won yesterday.  You can see them in this post.
I also have some birthday goodies from my parents, but we'll save those for another post.  (For most of September, they drove east until they hit the Atlantic Ocean and camped all the way up the coast (more or less) into Canada.  They stopped at what sounds like a LOT of fabric shops and quilt shops.  I benefitted!)
Happy quilting,
Katie
Posted by Katie at 7:27 PM

Great quilts. Your Mom's is just amazing! It is my favorite. Great color and great pattern.
I guess you are both talented quilters.
Thanks for sharing all the photos with us.

I also am disappointed when I can't get rid of all my money at a quilt show! I go ready to spend. LOL. Luckily there are LQS and internet shops too.

Not to sound biased or anything, but I think your mom's is my favorite out of all of these;) I love what she did with those circles...was that a pattern, or something she came up with on her own?
I love the fabrics you found. I try not to take my bank card with me to quilt shows....I can figure out down to the penny practically just how much is in there that I can spend and still have gas money for the hubby to get to work;)
Happy Quilting!!

Don't you just love quilt shows? I do! How nice it was that you took time to give proper credits. All of the quilts were very nice, but I agree that your mother's is spectacular! The first one you showed is very pretty also. Thanks for sharing the pictures. ---"Love"

Hey, me too! Love your mom's quilt. Can/would you ask her to share the pattern? It looks like the kind of quilt that you can use up all those tedious little pieces in. Love all the pictures and glad you had such a great time.

Ditto! Ditto! Your mom's quilt is amazing!!! I would like the pattern as well, if possible. I also love quilt shows and love to check out all the vendors. Sometimes, like you, I am not able to get as much loot as I would have liked to get.

Thanks for sharing the pictures. Love the red and green antique quilt. I am glad you think of me when you look at old things ?! ;)

Your moms quilt is amazing and looks quite hard and time consuming. I love how she added the flowers and the gradation of the fabric colors sets it off quite nicely. I also like the Sweddish Goat Christmas and Lulas Dancing Animals, I have not seen those patterns before, were they made up (if you know)?