It's been a crazy week around here with little quilting going on...
The middle of last week, the hubby's grandpa went into Hospice.  They gave him 3-5 days to live, but we doubted them.  We shouldn't have.  Wednesday afternoon he passed away.
But before anyone gets terribly upset, you need to know that it was time.  He'd been gradually getting worse and worse over the last year.  His quality of life the past few months was almost zero.  He was a great grandfather many, many times over and lived a full life, though I don't think it was always easy.  He was 85 and had lost his wife almost 20 years ago.  He was ready to see her again (and had been for some time) and seeing him in that Hospice bed was hard for everyone.  He is in a better place now, healthy and whole and reunited with the love of his life.  You can't be too sad when you know that.  He will be missed, but the healthy, loving man we knew a few years ago is how we will remember him.
A fond farewell to Grandpa May.
And I have another fond farewell... 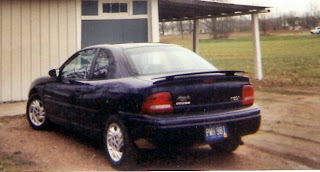 The beloved Neon is gone.  This may be the only picture I have and it was taken to show the garage at our "new" house when we moved here in 2002.  The car just happened to be there.  This is before it started rusting, before the timing belt shredded and started a whole host of problems, and even before my state decided these white-on-blue license plates weren't good enough and sent me a blue-on-white one to replace it.  And before it was fully paid for!
It was doing so many random bad things and I knew the repair bills would just add up and up and up.  I worried every day that I wouldn't make it to and from work without having to involve a tow truck and I'd been car shopping online for a while.
Last week, I paid off another loan, so the money was there and the hubby and I went out yesterday and bought this: 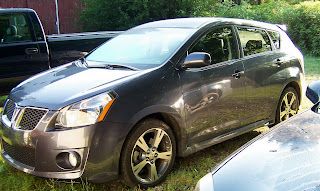 Not the best photo, but I'm still in my pjs so we'll see about getting a better one later.  It looks grey, but the official color is "steel blue metallic" and it's kind of a bluish-greyish-purplish color.  The sun is coming up from behind it, so it's hard to see the color.  But it's a 2009 Vibe.  Used, but since Pontiac doesn't exist any  more, you can't get new ones.
I like it.  :)
The hubby likes it.  :)
My parents like it.  :)
(We bought it about 5 miles from their house, so not stopping by would be kinda rude.)
My hubby's whole family was impressed with it.  :)
(We headed straight there for family time after a quick stop at my parents'.)
So a fond farewell to the beloved Neon.  It was hard to see it go.  I thought about taking a photo before we left yesterday, but I just couldn't do it.  I had that car before I met my hubby.  That car plowed its way through huge snowstorms without complaint or trouble.  It got me safely to and from work for 12 years (except that one day where the timing belt shredded and I coasted safely to a stop along a freeway in rush hour traffic...).  And it lasted me 2 more years than my desired 10 - nothing short of a miracle in the eyes of most (noone expected the car to really last longer than about 5 or 6 years because it's a Neon...).
221,700 miles.
And a warm welcome to the new Vibe.
But due to all this excitement, my mind was racing last night.  Crazy dreams, worries about crashing my car before I even make the first real payment, concerns about family...  Strange that this would get the creative juices flowing, but I feel the need to sit down and design a few quilts.  We'll see where that goes...
For today, my goal is to get handprints of my hubby's cousin's immediate family.  The cousin's wife has been diagnosed with throat cancer.  I don't know any more, but I do know that a quilt is in order and, since they have 6 kids, I thought raw-edge applique with handprints from the kids and hubby would be perfect (and fast).  And since they're up from Alabama for Grandpa's funeral, I'll have a fantastic opportunity to do it on the sly.  I'll show pics soon!
Time to go get a few more household chores done before the hubby gets up and we go back over for more family time.
Happy quilting!
Katie
Posted by Katie at 8:20 AM

I'm sorry to hear your hubby's grandfather passed away. It is sad but it is wonderful he had a full life and is now with his wife again.

It is so hard to say goodbye to an old car. I was really attached to my last one because I bought it myself during my divorce and I paid it off quickly. It was really all mine. The new car is great but there were a lot of feeling attached to the old one!

Some creative quilting sounds like good therapy, go for it!

I am so sorry for you and your families loss.

Even though it's a sad time, enjoy your family time. I love the raw edge applique idea. Please post pics. Connie204

It's hard to see them go, but we all know there will always come that time. It seems to make just a little easier when we know that the person has lived a good, whole life and can move on peacefully.
I know about losing a car/vehicle that we had become attached too. I had to give up my Xterra earlier this year...I actually cried;( But at least you got to get a pretty new addition to the motorpool;)
The idea for the quilt for cousin's wife is great...I am sure it will help her along her journey.
Relax, quilt, and take care;)
Happy Quilting!!

I am glad your at peace with your grandfathers passing, at least for the moment. I know it's the sudden moments that hit me when I think of Nana.

oh I am not looking forward to saying good bye to my car. It's coming soon. Not because theres somethign wrong with it, but because I have two children and a 2001 VW Bug. I have 110,000 somethign on it. Maybe more now. Much loved car.

Lots of good-byes for you and your family. My thoughts are with you as you say good-bye to grandpa May.

Best of luck to the DH's cousin's wife. I hope all goes well with treatment. I am sure her quilt will be a comfort.


Bye to your Neon and hello to your new Vibe. (Maybe that is what brought your quilting vibe back), LOL. Enjoy being with famly, and sewing, and geting used to your new car.

God Bless Grandpa May. Farewell little Neon. Hello Vibe. Endings and beginnings. Such is the circle of life. I think your hand print quilt is a wonderful idea. Ann :-)

I'm sorry for your family's loss, but glad that you will be able to remember the vibrant man he had been.

Farewell Neon, hello Vibe! I'm not ready to let go of ours yet, but then it has many fewer miles than yours had. It's a 2000, bought in November 1999, and it still has only 84,000 miles on it. The hubby buses to work and family lives a flying rather than driving distance away so our little car has a pretty easy life! Plus it is entirely paid off, so I can put up with a lot :)