I was hoping to have more time for this, but the hubby says "let's go car shopping," so I better type fast!
What I did today (while the hubby was out playing basketball with his buddies):
Reduced this: 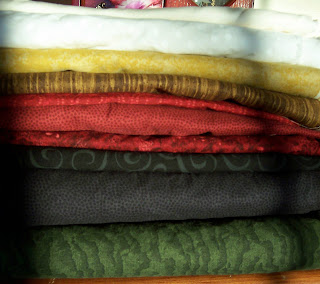 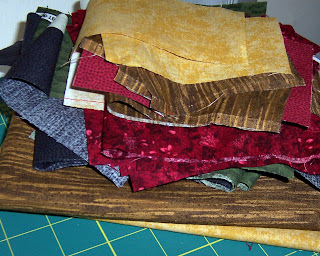 (Some of the stuff in that first picture weren't intended for this project, if you remember from the first time you saw that stack.)
By making these:

Blocks, sashing and cornerstones, left to right.  I still have a little ripping and re-sewing to get the remainder of the partial green/black blocks finished.  The quilt has 2x3 and 2x2 patches around the outside.  Here's the pattern again if you forgot.
Now that it's in distinguishable blocks, I have to be a little more sly about working on it.  Up until now, I've just worked when he's busy doing other things.  From now on, I think I'll have to only pull it out when he's not here...
Why do sewing machines need odometers? 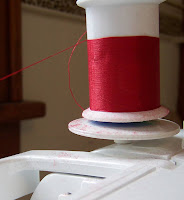 This is the second spool I emptied today.  The first had little thread left on it, but this one...it had quite a lot.  And I only sewed the portions that had red in them.  I used black for the green/black blocks!
Notice all the red fuzz?  I think I'm gonna have to clean out my machine - that same red was in the bobbin too...ugh!
What I should have been doing, since this is supposed to be for Christmas and I've got plenty of time, was blocks for the block swap.  But this quilt had taken over a big portion of my cutting table, so I figured just get it finished.  Maybe later...maybe tomorrow.  I might bake cookies instead tonight...
I also have the brown and pink quilt finished, but no photo yet.  I have to talk the hubby into holding it up for me, so that may take a few more days.
Happy Quilting
Katie
Posted by Katie at 4:14 PM

You accomplished quite a bit. I'm cutting for two different quilts today, too. Hope your car shopping is successful! ! !

I hadn't seen the Big Bad Plaid before--that is a winner. I'm starting my swap blocks tomorrow, too. I bought my machine for quilting a couple of years ago and so far, I have been really good about fighting the lint. Q-tips are always on hand and when I change the bobbin, the casing gets a good cleaning. I don't have to try & remember when I last cleaned it! These cotton threads for quilting are really linty. Hope you had good hunting for the car...I gather that means your "old favorite" can't be saved? Mary

You made short work of that pile Katie! I like the idea of an odometer for the sewing machine. I think we'd all get a surprise at just how much we do. I'm looking forward to seeing pix of the pink and brown quilt. Happy Stitching, Ann :-)

That was a productive day. Those colours are looking great together. I'm impressed that you can keep it secret from our hubby. Hope the car shopping went well. -Joanne

I like that pattern. It is a great guy quilt.
You were really cranking out the blocks. I mostly wasted time yesterday.
Did you find a car? I hate car shopping. As long as it runs when I turn the key tht is all I care about. My hubbie and my girls ae into cars and they can talk on and on. My eyes glaze over, I am sure like theirs do when I talk quilts. LOL

Goodness me! I'm far, far behind on reading and commenting on blogs! Everyone has been so busy since I've been on here! Your project is looking great! Can't wait to see more! ---"Love"