About the middle of last year (seems odd to be saying last year about 2009 already!), the hubby and I decided to have our own, two-person "Biggest Loser" contest. He'd participated in one at work earlier in the year and lost a lot of weight, but gained some of it back. I would like to lose a few pounds and he wanted to lose some of what he'd re-gained, so we decided to compete against each other. Christmas was our end date.

I didn't take it too seriously. I figured I'd lose because the hubby loves the gym and can not eat for 3 days without problem. (I know, I know, it's not healthy, but you gotta pick your battles and this is one I know I won't win.)

I guess I shouldn't say I didn't take it seriously because I did make small, healthy changes in the choices I make in what I eat and when - stuff that I can continue. I should say I didn't take winning seriously. So I didn't think too hard on what I'd win. The hubby was saying things he wanted like a ginormous television (where would we put that?), another new gaming system, a trip to Vegas with the boys...so I figured with that kind of motivation, he'd surely beat me.

But then, much to my surprize, I won! Then I had to figure out what I wanted... It hit me one afternoon...books! I love books and there were a few I'd been wanting, but not able to justify their purchase. I had to limit myself because I could have gone nuts with reading books, but I don't want to break the budget!

Here are three of four: 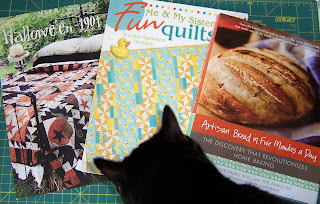 Tucker is helping me take the picture. Or maybe he was just making sure the books are arranged properly...

There 's a fourth book that's on pre-order. It's by Judy Laquidara, called "Weekend Quilts" and I've been eyeing it since she told us (on her blog) that it was coming out. She does such great quilts and there's one in there I really like...I can't say too much more because now that I have a grown-up blog, who knows who might find me!

The Halloween one I am going to try to make for myself in time for the holiday this coming year. The bread book...mmm...I've already been making it, but wanted the book (you can find the basic recipe online, or at least you could) so I could make more and do it better. And the "Fun Quilts" book I saw on a shop hop this summer and passed it by, so I'm excited to have it.

And I have a use for that last book already...the hubby came home the other day and told me his 16-year-old cousin is pregnant. Not the best timing for her, but definitely a person who is going to need a baby quilt! I'm going to hold off a bit to find out if she's having a boy or girl, but I'm excited to have a new project in the wings.

My goal until then is to finish up two tops (get one of those quilted and given away, too) that have been languishing in my sewing room. Oh, it feels good to have goals again! (Maybe that's what kept me from getting motivated and getting things done?)

Great job!! I've been eying the Halloween quilt for a while. That will really be gorgeous. The bread book looks neat- I've never made homemade bread before without my bread maker machine. Is it difficult? Can't wait to see your finished quilts. :) Christine PS- Tucker was drawn by the invisible kitty magnetic force of quilts.

This is non quilt related, but how do you make the photos post so that they open another window as a blown up picture? I can't seem to figure this out! Christine

Congrats on your win! The books look great, the quilt ones will be so much fun and the bread book sounds yummy! Glad to find you here so we can all continue to keep in touch!

Congrats! My DH can "watch" what he eats for a week and he is down 5#. I have always struggled, so good for you winning. Don't you love getting new books? Can't wait to see what you are working on. Beth

Great result on the weight loss. You have some terrific books there and you'll really enjoy the Artisan bread book. It's a big hit in Blogland. You have some super quilting patterns there and it will be a treat to see what you make from them. Tucker is your assistant stylist and he's doing a great job! Happy Stitching, Ann :-)

Great job on making small healthy changes. They're not necessarily easier than large ones - I'm still reaching for those cookie snacks instead of fruit! Enjoy your winnings!

I'm just so glad to find you here! This is my first entry on blogspot. Your page is really pretty; I may need help in setting mine up. Congrats on the weight loss; I need to do the same thing, but I too am still reaching for candy and cookies!