hailey's quilt - the last of the Christmas quilts

I don't have much to share this week.  I haven't sewn much, but what I have done is top secret, so it's time I finally posted the last of the quilts I gave away at Christmas.

Early last year, my brother-in-law's girlfriend gave me a stack of owl print squares that her sister had cut with the intention of making a quilt for my niece, Hailey.  That's as far as it got, so she asked me to step in...

So I went shopping and bought a few more prints to go with the owls - girly girly!

And then I planned and changed my mind and planned again... 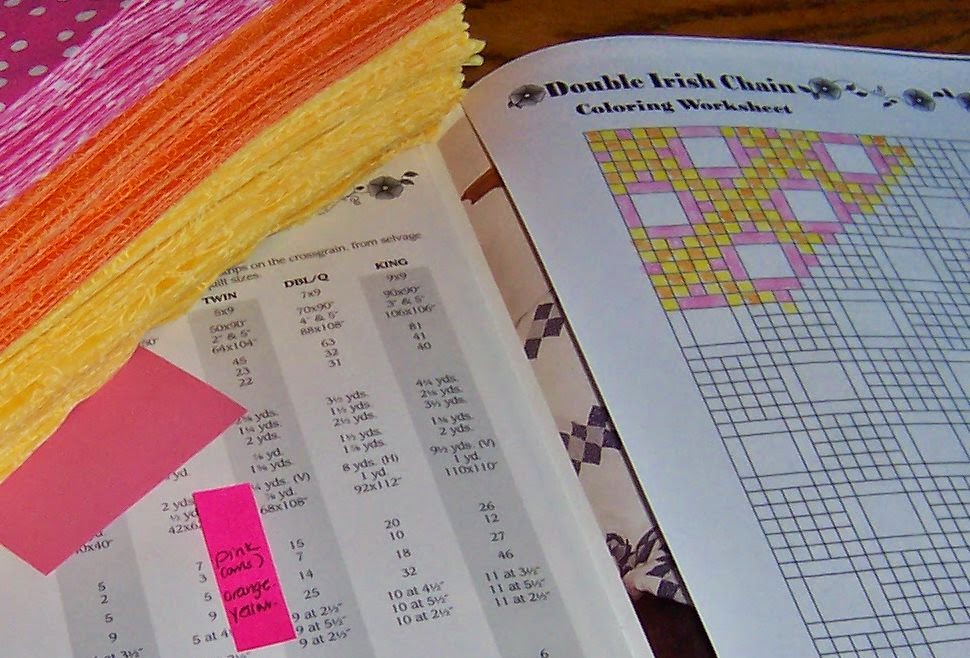 And then I sewed and sewed.  I finished the top at my guild's quilt show in March, but the quilt was due to be either birthday or Christmas present, so I knew I could procrastinate a while.

We bought a bike for her slightly older cousin's 2nd birthday in May and once Alexis was willing to get off and share, Hailey wasn't.  So we ended up buying Hailey her birthday present 6 months early - she got a bike the next weekend.  Which meant the quilt would be a Christmas present.

So I put off quilting it a little longer... 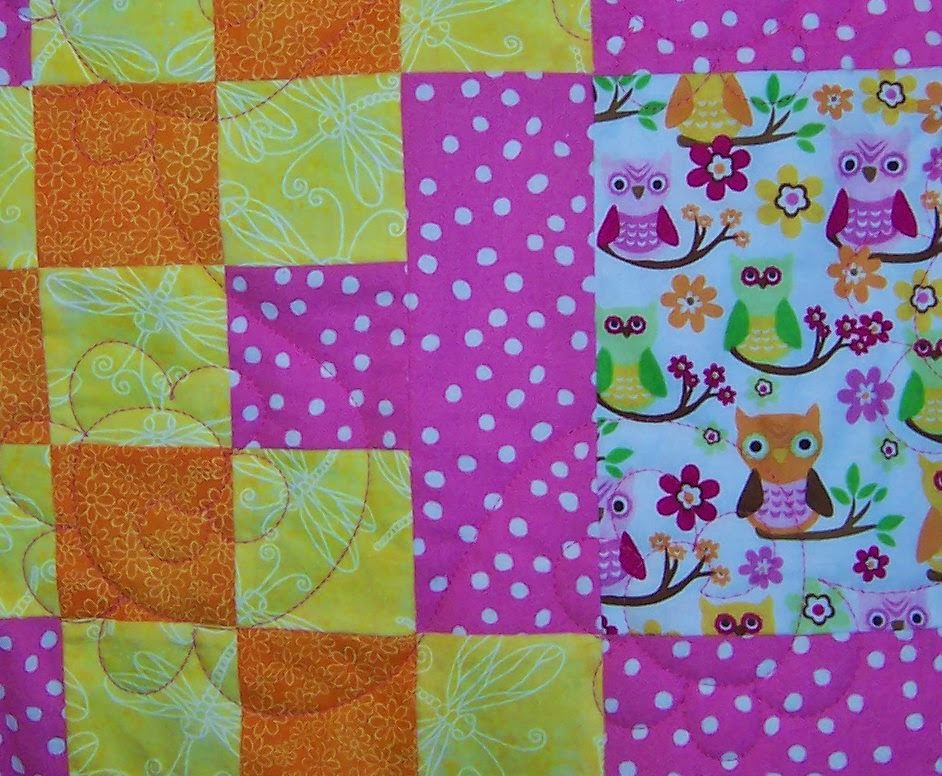 And then I whipped the binding on (a mix of the yellow and orange) and labelled it, all in time for gift-giving on Christmas day. 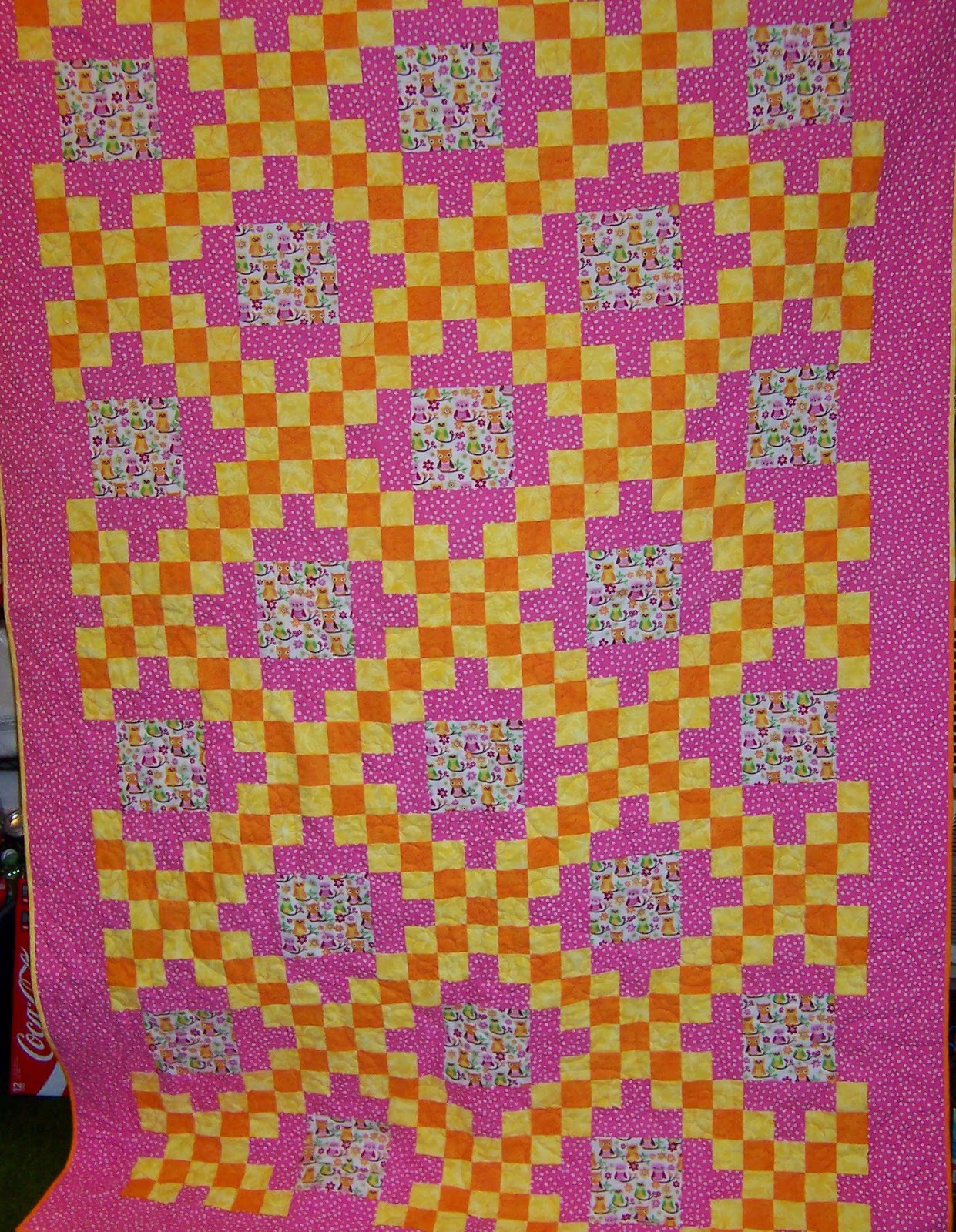 I don't think it was as big of a hit as the dinosaur quilts, but there was a lot going on that day and most 2-year-olds don't get it for something like this.  Mom liked it and I hope now that they're in a house of their own, it's on her bed, seeing some use.

(Funny, though, this quilt seemed so ORANGE hanging over the longarm here, waiting for gifting, but it seems rather pink in the photo - I'm glad for that because I wanted it to be more pink!)

And I will share a couple of sneak peak photos of the row-by-row...

I had fun with her blocks.  They're not quite sewn into a row yet, but that will happen today.  I think.  Yesterday should have been a very productive day, but it wasn't.  I'm hoping today will be better, but knowing it's -12 outside, with a predicted high of 4, snuggled up under a quilt with a pile of kitties and a book sounds a little better!  At least it's not very windy so the furnace can keep up!

Happy quilting,
Katie
Posted by Katie at 8:57 AM

Brrrr----! I can't even imagine 12 below! Your quilt turned out really cute in those bright colors. ---"Love"

I curled up under a quilt yesterday and finished a book.
I love that owl quilt. You did a great job adding colors to the owl print. It is just so bright and happy and girly.
Happy stitching.

Ugh! -12 is too cold. I did live in South Dakota for a few years and also lived in a northern suburb of Chicago for another 25, so I know how cold it can get. -25 is no fun at all! Stay warm and enjoy working on your quilts! I love the owls and the pinks, oranges and yellows in the cute little quilt. It looks so sunny and fresh.

Sitting here melting in the heat I'm trying to imagine -12. Feels good. I love your owl quilt! I'm sure it will be much loved. Give it time. Two years old is a fussy age. Your owl print is adorable. The row by row is intriguing.

Very cute quilt! I can't imagine that temp either since I lived in TX for 21 years and now in OR, even though I grew up in the Chicago area. I do kind of remember how cold it felt. It is amazing! My DGS is going to school in MN and he's sad that it hasn't been that cold there - or had tons of snow. He complains about it not being cold enough. :-)