Though the officially assigned UFO for this month was my Garden Variety quilt, I finished that quite early this month...thanks to working ahead in other months.

With that completion, I'd finished 11 of 12 tasks for the 2011 UFO Challenge.  I was feeling pretty good about what I had finished, but still a bit guilty for not finishing that one last project.  I didn't want to get so close and not finish.

I've been putzing along, working a little here and a little there, but I think dreading the set-in seams kept me working at an even slower rate on this Lone Star-Whig Rose quilt.  But I've had the last few days off and decided it was time to dig in and finish the top.  I knew I could do it - the appliques were nearly done and the star was together before the challenge started - I just needed to DO it! 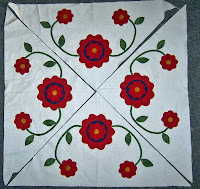 There are 4 squares and 4 triangles that get sewn into the star to make it square.  The squares have been done a while and the triangles were getting there.

After about a whole season of Desperate Housewives (yay Netflix!), I got this far this afternoon and tried to call my mom to see what she was doing tomorrow.  (Maybe talk her into sewing these into the star?)  She didn't answer and I couldn't sit still knowing I was so close, so I took a chance on waking up the sleeping hubby and started sewing.

(After a quick google search on just how to sew these silly things in there!) 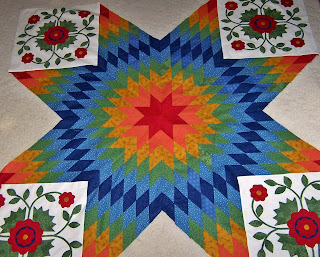 I got this far and Emma decided she was S-T-A-R-V-I-N-G.  She's fed canned food twice a day and has crunchies all the time, but when it gets near mealtime, you'd think she was dying.  I think each corner got worse and maybe it was because I had "help," but I think it was just beginner's luck. 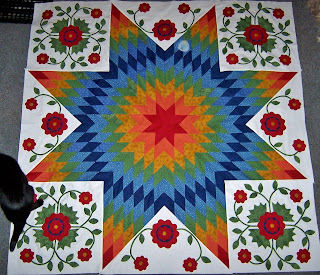 We have a finish!
And it lays flat!
Guessing it measures about 50" square.  (= lazy)

Now what to do with it?

It was started to be a wedding/anniversary gift for my brother-in-law, but that marriage ended more than 7 years ago (yep, it's been a UFO for a while).  I've thought about giving it to my ex-sister-in-law because maybe she deserves it, but I'm not sure she'd want it.  I've also debated donating it for some sort of raffle fund-raiser, but many of us know how poorly those often do.  Any ideas?  (Yes, yes, I know you'd all be happy if I shipped it to your house...)

So let's review where I started in January:

8 projects needing finishing, divided into 12 months of tasks.  (Don't be fooled by the one in the upper right - it's a photo of the quilt from the pattern and was a kit I ordered in the process of making the 2011 blog post-list!)

And now we have: 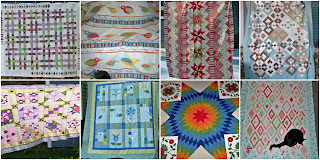 8 finished tops!
(Oops - I got the wrong photo in there of the Lone Star-Whig Rose, but you've seen the one above and know it's finished, right?!)

I'm pretty darn proud of myself for getting them all done, though a little surprised that none of them have been quilted and given away yet!
(One I do have plans for, but don't need it until July, so you know I'll be finishing it IN July!)

In a day or two, I'm going to put together a few more collages to show what else I got done this year because though the list is shorter than it was for 2011, the projects are bigger!  And it's fun to see them all together.  Makes me feel super productive.

Congratulations on all of the finishes! You did a great job. Everything turned out so beautifully. Having a schedule and deadline really helps with the organization. Wow, now on to 2012!

Yes! You have a right to be proud of yourself!!! The quilt is beautiful and amazing! I don't know if I will do the challenge for 2012. I'm thinking about it, but don't know if I want the pressure.

You did good, Kid! Just as I said, the Whig Rose is beautiful. Surely you can find a place for it in your home! You really accomplished a lot this year. It will be interesting to see what you drag out to finish in 2012! Will you have time to start some new projects?? *tee hee* ---"Love"

That is one dandy Lone Star! You are a quilter extraordinaire. Congratulations on your finishes. It's a terrific feeling to knock those UFOs off the list. I've really enjoyed each and every one. ann :-)

Oooooh! This is gorgeous Katie! It is OK to keep it for yourself, you know, though I can take it off your hands if it's really taking up too much space in your house :) I just don't have the patience to applique a quilt like that. Congratulations on your finishes.

You are super productive!!! I seem to remember lots of baby quilts over the year. And thrown into the mix, a huge stack of books to read, a career change not to mention school and exams. Great job!!! How you gonna top that in 2012? ;)

That quilt is awesome!!!

Well done, girl! I am going to try and keep up with you this year!

Good job on your applique!! It looks like you enjoyed every stitch! Hope you have a VERY HAPPY NEW YEAR!!

Congratulations on all your accomplishments!!
Happy New Year.
Always, Queenie

That Lone Star is a beauty especially with the applique set ins. A LS is still on my bucket list and I have debated about doing it with decorative set-ins rather than plain but I am more worried about the applique than setting in the triangles and squares!

Where ever it winds up landing, the home it lands in (or stays in?)will be blessed to own it!

Wow! That is an amazing Lone star! I love the colors and I am really impressed that it lies flat!

That is absolutely gorgeous! Congratulations on getting them ALL done. Have a happy New Year! :o)

Wow, the lone star is beautiful! NICE JOB, and congrats on all the completions for 2011.

Stunning year end finish, Katie! That is such a gorgeous star and roses and they came together so well. Congrats on all your finishes!

That's beautiful Katie -- I say keep it! If you really do want to give it away, just wait awhile and some day it'll tell you where it wants to go.

What a BEAUTIFUL quilt!! I'm sure glad you joined the UFO challenge so we could see this finished. Great job on your UFOs this year!

Very pretty finish! Congrats on all your other finishes too!

I just discovered Jo's blog last month, and I am soo excited about doing the 12 in 12! I saw your pic posted, it was so striking, I just had to drop in and see more! Looking forward to seeing your accomplishments in 2012!

looks great! too bad about the lone star.... i finally got my 2012 UFO's organized and posted, so i'm looking forward to the next drawing!

I'd be happy to take that Lone Star off your hands, if you still have it - LOL. Congrats on all your wins! Looking forward to see what else you get finished. Off to read more of your blog.

Gorgeous! I like how you changed Jean's pattern to fit your space and taste.