I should be sewing on labels.  Or binding.  But it's raining and icky and a nap sounds good, so at least blogging will keep me in an upright position!
Since the twin quilts started their journey to their new home today, I think it's safe to show pictures.
One of the twins finally revealed herself to be a girl.  She'll be called Riley.
Riley's quilt: 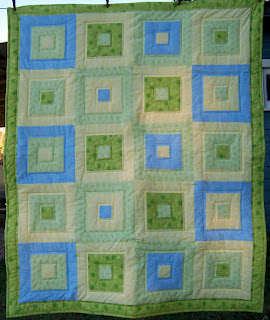 Baby #2 is being a little more stubborn.  He or she will get their quilt label finished when we find out the gender.
Haley's quilt: 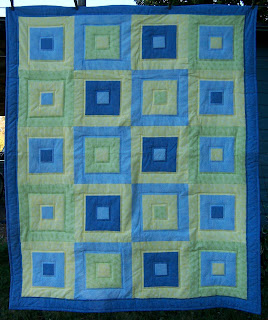 (No idea why that blue looks like the photo was taken after dark...  They're also a little wrinkly from having been folded a while.)
I quilted them simply.  1/4" from the ditch.  Really soft light green with polka dot flannel on the back, as these will be fall babies. 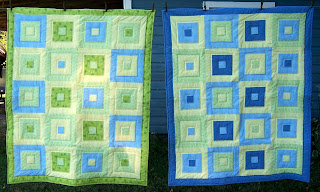 I also thought I'd show a few photos of my quilted circles.  I did them free-hand, eyeballing it as I went.  I did sketch circles in the lime green outer cornerstones, but I don't think that helped much.  I was more focused on keeping on the line than steady movement...  Ah well, it's going to be used, so no worries. 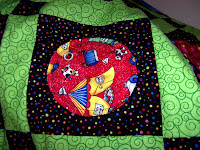 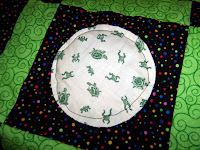 and the worse
And a few photos of what goes on around here when I'm not entertaining... 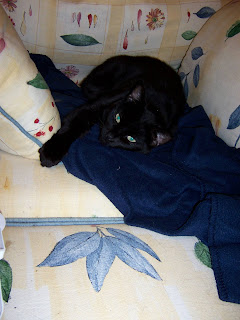 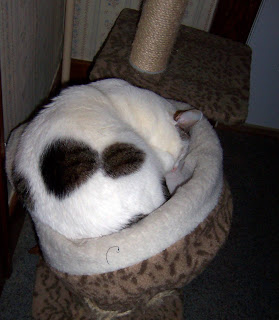 Emma.
(That poor cat tree cat bed - it never was quite right, but it's taken a beating!)
Happy quilting,
Katie
Posted by Katie at 2:42 PM

I love your twin baby quilts. The simple quilting you chose is perfect for these. Good job quilting the circles - I wouldn't have attempted it, so I'm giving you a pat on the back. Cute cats - and Emma doesn't seem to have a problem with the cat tree cat bed! -Joanne

The twin baby quilts are adorable, and that I Spy quilt is going to be too! Looks like a couple of very spoiled kitties! *wink* They are so cute! ---"Love"

I adore those quilts! I like everything about them, especially the colors:)

The quilts look fantastic! Why not quilt a couple of extra circles in each circle - freehand - it's okay to be wobbly! Funny pusscats. Ann :-)

Those baby quilts are just so adorable. You did a great job with the colors and with the quilting. They are going to be so loved.
Your circles are looking good... no one is gonna measure them.
Poor Emma looks like she needs a bigger bed ( like maybe yours, LOL).